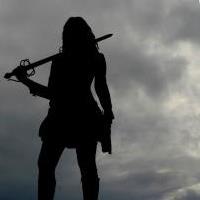 Judges 6:12 When the angel of the LORD appeared to Gideon, he said, “The LORD is with you, mighty warrior.”

Gideon expressed to God that he felt incapable of doing what God has asked. Indeed, when God found him, he was hiding from the problems of his family and his people. But he was assured God was with him and that he was a warrior. A mighty one, at that!

From that point on, God gave Gideon everything he thought he needed to do the job, right?

No. Instead, God took the army Gideon had assembled and whittled a 32,000 man army down to 300, and gave Gideon lanterns in clay pots to defeat his enemies. God took away most of Gideon’s “back up”, in order to prove it was God, not Gideon, that wins the war.

Joseph loses his youth and freedom in order to be placed where God needs him. David sheds the armor given him by a worldly king, and faces a giant with only a slingshot and God’s backing. Mary is completely ostracized, forfeiting most of her relationships and losing reputation for the rest of her life when she says yes to God. None of the people that Jesus chose to spread the gospel were public speakers or men of influence, in fact some were completely rejected by their culture. Yet He chose THEM to evangelize for His church.

What look like certain failures to the world, are historically set-ups for God’s greatest triumphs.

We are often stripped down to the bare minimum so that when the victory comes, all people are left with as an explanation is “it had to have been GOD”. He reserves this privilege – it is a privilege – for those whom He is calling out to do something for Him. What we see as everything going wrong, God sees as stream-lining us for the mission that will give Him the glory and further the Kingdom.

“There was no earthly way they could have pulled that off. They had nothing. They were sick. They were outcasts. They were poor. They were unqualified. How did they DO that? ”

If you have lost relationships, resources, worldly security, your competitive edge as the world has taught you – STAND UP. If you have placed your trust in Him, He will use you in mighty ways. What the world sees as weak, as a loser, as the underdog, as the lame and the poor, as the weirdo, the fanatic, the naive, the unrealistic and the irresponsible – God sees as His mighty warriors. We are no rag tag team, friends. We walk with God’s angels and His armies. We are not disadvantaged, we are empowered. We are not being punished, we are chosen. We need to rise up and know that nothing has gone wrong. When you give your life to Him, you give Him the right to do what He sees fit for His glory. What an honor it is to serve the King!

One thought on “God’s Warriors (This Means You)”